Check out where all the top NFL Draft prospects land in SBD’s odds-driven mock draft.

We are less than a week from the 2022 NFL Draft, as the first-round is scheduled to begin on Thursday, April 28 at 8pm ET. Unlike most years, we actually aren’t overly confident in who the first-overall pick will be. We’ve seen all of Aidan Hutchinson, Travon Walker, Kayvon Thibodeaux, Ikem Ekwonu, and Evan Neal projected to go the Jaguars with the first pick.

As a result, it has been very tiring trying to keep up with all the NFL Draft rumors, and trying to determine which “expert” to trust is anyone’s guess. I believe I have the best sources in the business, though: sportsbooks. I have left all opinion to the side and trusted my sources. They have provided me with odds to be a top five/ten pick, a first-round pick, draft position over/unders for many players, and lines for the total number of players drafted at each position, among other NFL Draft props.

Making these all fit was quite the task, but I’ve pulled it off. There are some discrepancies with their odds, though, which have opened up some betting opportunities. I discuss those below the mock. 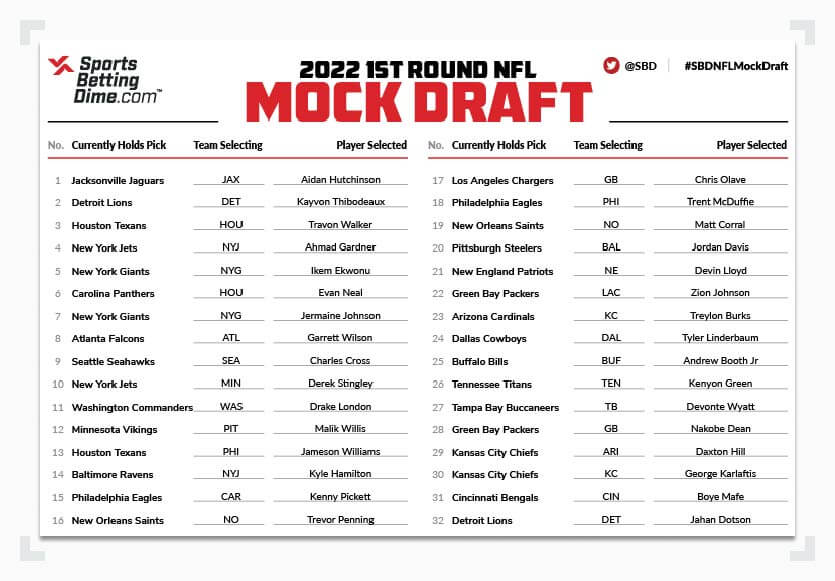 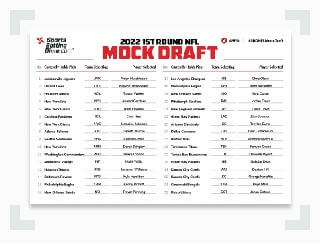 If you want to check in on my sources, check out all the NFL Draft odds with some of my notes on significant movement.

All asterisks above denote a projected trade.

Although Aidan Hutchinson’s odds to go first-overall have been fading over the last month, he is still the odds-on favorite. Then I have the Lions and Texans also taking edge rushers in Kayvon Thibodeaux and Travon Walker, respectively. Thibodeaux currently has the best odds to go second-overall, while there is some discrepancies in the odds for the third-overall pick—we’ll dive into that later.

My mock gets a little chaotic starting at pick ten. Let me be very clear: I do not believe this many trades will happen. But in order to satisfy what the props suggest, and not have teams draft positions they are already strong in, I needed to facilitate a handful of trades. Here’s a quick explanation on each:

I do not believe all of these trades will happen, and I’m sure you feel the same way. The fact that I needed to push these all through tells you there are some great betting opportunities to jump on.

I want to highlight five betting opportunities for the 2022 NFL Draft, and also offer a quick piece of advice for anyone who is high on a certain player.

The Houston Texans hold the third-overall pick in the 2022 NFL Draft. Odds favor the Texans to take a DL/EDGE at +100, with offensive lineman coming in second at +175. Odds to be the first-overall pick still favor Aidan Hutchinson, with Travon Walker creeping up on him, and the odds to be the second-overall pick favor Kayvon Thibodeaux now. So that takes those two DL/EDGE players off the board.

Then the Jets are also favored to take a DL/EDGE with their first pick, which is fourth-overall right now. They are given +125 odds to do so. However, there are only three DL/EDGE players given favorable odds to be taken in the top five. This means the Jets are either going to reach for Jermaine Johnson II, who is the projected next DL/EDGE player to come off the board and is given +400 odds to go in the top five, or they take another position.

Just because Sauce Gardner is tall, long and physical, doesn’t mean he has stiff hips. That was a false narrative about the CB, earlier in draft season.

He’s extremely fluid, and uses his hands to feel route breaks. This allows Sauce to get back into the hip pocket and 🔒⬇️ WRs. pic.twitter.com/Yz4vSGFKvA

The next best players on the board, according to the odds, would be Ahmad Gardner (CB) or one of Ikem Ekwonu / Evan Neal (OLs). You can get the Jets at +250 to take a defensive back and +350 to take an offensive lineman.
We also have to consider it may not be the Jets odds that are off. What if it’s the Texans’ odds are the ones to pick on? You can get +175 odds on Houston to take an OL and +300 for them to go with a DB.

Keep in mind, this all gets completely blown up if one of these teams trades down.

If you’re not already signed up at DraftKings, be sure you check out the best DraftKings promos before registering.

Jordan Davis has gotten a lot of attention due to his size and athletic ability. I think he’s going to be a very good football player for whoever takes him in the draft. But I really struggled to find a place for him.

So while I do have the Ravens taking Davis in my mock, it had to come later with Baltimore moving down to satisfy all the other odds.

You can get Desmond Ridder at -125 odds to be a first-round pick at DraftKings. FanDuel has his draft position over/under at 30.5 with both sides seeing -114 odds. However, FanDuel has their line for total number of quarterbacks taken in the first round at 3.5, with the over given +182 odds.

The third-most wins by a QB in college football history.

Now @GoBearcatsFB QB @desmondridder wants to bring that success to the league. 💪

This opens up an opportunity to bet (1) the over on Ridder’s draft position, and (2) the over on quarterbacks taken in the first round at +182. If you do this properly, you can earn a profit either way and also leave yourself a small window to middle the two bets.

Then we have Tyler Linderbaum (-900 to be taken in the first round), Trevor Penning (-700), Zion Johnson (-300), and Kenyon Green (-250) all given very favorable odds to hear their name called on Thursday night. That puts us at seven right there.

But we also have Tyler Smith (+100) and Bernhard Raimann (+135) who have a shot to go in the first based off their odds. There are nine teams selecting in the first round that DraftKings favors to take an offensive lineman with their first pick.

As I said, this final one is more advice for if you do like Malik Willis to go early in the draft.

Willis’ draft position over/under is set at 10.5 with -115 odds on each side of that total. However, his odds to be a top ten pick are -200 at DraftKings. Be sure you avoid betting those odds if you do think Willis goes in the top ten—just take the under on his draft position total at 10.5.