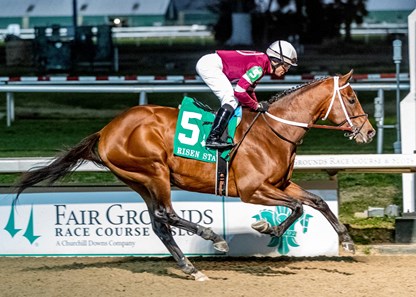 The annual “Run for the Roses” will take place on Saturday, May 7, at Churchill Downs in Louisville, Kentucky. It’s the most exciting two minutes in sports and the 20-horse lineup will certainly not disappoint in 2022. Four early favorites are listed at odds of +600 or better. Here’s a look at the 2022 Kentucky Derby horses.

The overall betting favorite is the appropriately named Epicenter at +500 (pictured above). The three-year-old colt has won its last two races in a row. Epicenter captured the 1⅛-mile Risen Star back in mid-February and then won the Louisiana Derby at the end of March. Dating back to November of last year, Epicenter has won four of five starts and finished second in the other (Lecomte on Jan. 22).

Three horses – Messier, Taiba, and Zandon – are all listed at +600 at trusted online sportsbooks to win this year’s Kentucky Derby. Messier is the son of Belmont Stakes winner Empire Maker. Since June of last year, Messier has won or finished second in all six of his races. Most recently, he won the Santa Anita Derby Grade 2 at the beginning of April.

Taiba is the son of Gun Runner, the 2017 Horse of the Year. He won the Santa Anita Derby Grade 1 on April 9. It was just his second start. He made his debut in a maiden special at Santa Anita Park on March 5. He won by an impressive 7.5 lengths.

Zandon might be the most interesting horse in the field. He’s coming off a win in the Grade 1 Blue Grass Stakes. Trained by Chad Brown, Zandon shows maturity and tenacity that could pay off on May 7.

Every other horse on the board is given +800 odds or higher. The best of the bunch is Mo Donegal listed at +800 at sportsbooks. He won the Wood Memorial in his last race before the Kentucky Derby. The Wood Memorial just happens to be the exact distance – 1¼ miles – as the Derby. He’s not really a longshot at +800, but could surprise the favorites in the shorter distance race.

Smile Happy was an early favorite, but has seen his odds rise to +1200. He was cruising along with a couple first-place finishes at the end of last year, but Smile Happy has finished second in each of his last two races. The second was the Blue Grass Stakes earlier in April. He was unable to hold off Zandon in that race, which is why he now a sleeper.

The horse that many are talking about as a true longshot is Charge It. Given +2000 odds, Charge It ran second at the Florida Derby Grade 1 in what was just his third start. He’s got plenty of upside and continues to get better with each race.

The other longshot is Tiz the Bomb (+2500). Coming off a first place at the Jeff Ruby Stakes, Tiz the Bomb has the type of kick that Kentucky Derby winners have. He has yet to run his best on dirt. Tiz the Bomb will do very well in a race where the pace if fast right from the start.