The 2022 NFL Draft is nearly upon us! The Jacksonville Jaguars will officially be on the clock to make the first-overall pick on Thursday, April 28 at 8pm ET. Who they’re going to take with that pick is still very much up in the air. There have been four different players listed as the favorites to go first-overall: Kayvon Thibodeaux, Evan Neal, Aidan Hutchinson, and now Travon Walker.

With that pick being so uncertain, it gets real cloudy for the rest of the first round. But by this point, you’ve seen hundreds of first-round mocks from all the experts, each looking very different from the rest. Annoying, right?

We’re giving you the opportunity to show all these analysts who the real expert is. You’ll find a blank template to create your own NFL mock draft below. We’re eager to see yours, though! So be sure to snap a picture and tag us on Twitter @SBD. 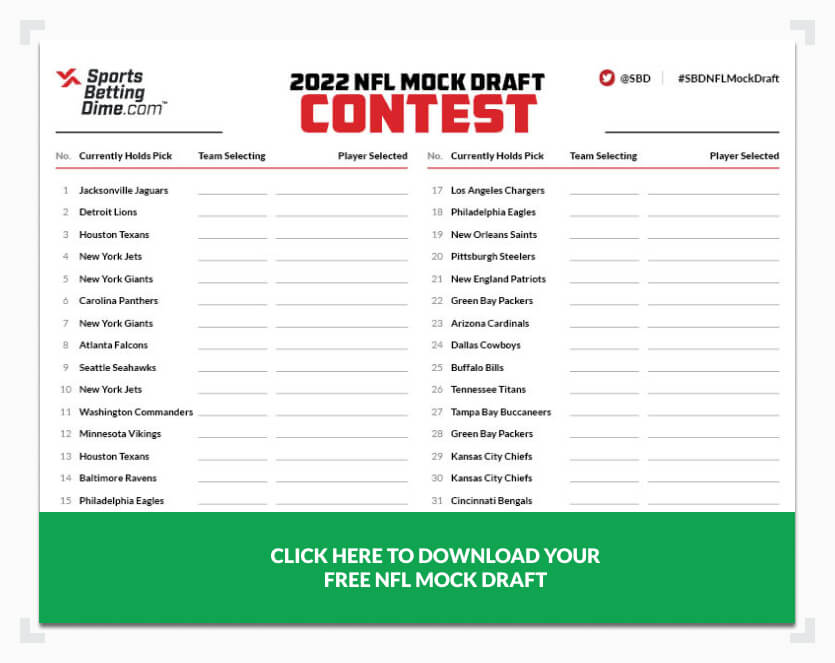 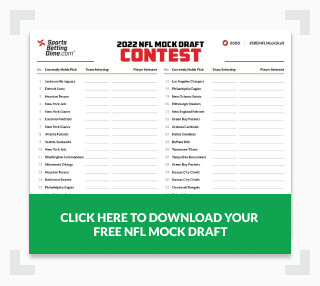 When filling this out, be aware that we have created that “Team Selecting” column so you can facilitate trades. Mark down the team you believe will make the pick and the player they will take.

The scoring system I created for this is as follows:

To be clear, the bonus point only applies if you have the correct player in that slot as well. An example of someone earning two points is if they mock Aidan Hutchinson to the Jaguars at no. 1, but he is actually taken at no. 2. Since he is one pick away from where you had him, two points are rewarded.

An example of someone earning one point is them mocking Kenny Pickett to the Panthers at no. 6, but he actually gets drafted at no. 4 or no. 8. This would be two picks away from where you had him, so one point is awarded.

Looking for Help in Filling Out Your NFL Mock Draft?

Want some help in filling out the later picks of the first-round? (Don’t be ashamed to take help in filling out the whole round either!) I’d recommend you don’t try and work your way through the thousands of expert mocks out there. Instead, educate yourself on the odds and make your picks around what the sportsbooks think will happen – they make money thanks to not being horribly wrong.

You can check out the following resources at SBD:

I will also be publishing a 2.0 version of the mock draft above, since the odds have changed pretty significantly since I published the first one on Friday.

After working in TV, Matt turned his focus towards numbers, specifically odds. He has been with us since 2016 and serves as SBD’s Editor-in-Chief, credited with creating our futures trackers, SBD’s score predictor, SBD Sharp, and his own model for calculating NFL SOS, among other products.

After working in TV, Matt turned his focus towards numbers, specifically odds. He has been with us since 2016 and serves as SBD’s Editor-in-Chief, credited with creating our futures trackers, SBD’s score predictor, SBD Sharp, and his own model for calculating NFL SOS, among other products.