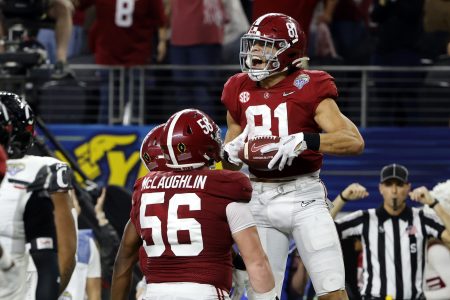 It’s no surprise that the top two teams on the betting board for next year’s College Football Playoff national championship are Alabama and Georgia. The two teams met in January for last season’s title. The Bulldogs pulled away from the Crimson Tide and captured the coveted crown with a 33-18 win.

Despite another handful of NFL talent leaving for the NFL, head coach Nick Saban will simply reload and go after it once again. The Crimson Tide are the early favorites to win it all at +225 at online sportsbooks. Georgia isn’t all that far behind at +475. The big question for college football fans is if any other program can challenge the Big Four – Alabama, Georgia, Ohio State, and Clemson – and earn a crack at this year’s championship.

Last season, Cincinnati of the Group of 5 American Athletic Conference tore through a perfect regular season that included an AAC title to earn a spot in the CFP top four. The Bearcats lost to Alabama in one of the national semifinals. Who could it be this coming season?

As mentioned, it’s Alabama at the top of the board. QB Bryce Young returns and he’ll be the front-runner in the Heisman Trophy race after winning it last year. Will Anderson Jr. returns on defense and Saban finished with the No. 2 recruiting class in the nation.

What’s surprising is that Ohio State is actually second on the board just ahead of Georgia. The Buckeyes are listed at +400 to win it all. They return QB C.J. Stroud who finished fourth in the Heisman race last year. RB TreVeyon Henderson is back as well and head coach Ryan Day had the No. 4 recruiting class in the country.

The defending champion Bulldogs had the best defense in the country last year. Several pieces of that defense – like DE Travon Walker – will be among those selected in the first round of the 2022 NFL draft. Even so, head coach Kirby Smart has plenty of talent waiting. He also had the third-best recruiting class this offseason.

Alabama, Georgia, and Ohio State are the only teams listed under +1000 odds. The other perennial favorite is Clemson, but the Tigers had an off year, at least for them, going 10-3. The Tigers are listed at +1600, but it’s hard to think of Dabo Swinney’s team as a sleeper since they have won two national championships in the past six seasons.

Two more teams are listed at +1600 and one of them is getting a lot of attention as a potential contender for the national title. Texas A&M is one. The Aggies started last season strong. At one point, Jimbo Fisher’s team was 7-2 with a win over Alabama. The season faded though as Texas A&M lost two of its last three games to finish 8-4. The Aggies enter the 2022 season with a battle for the most important position on the field – quarterback.

That is why USC and not Texas A&M is a legitimate sleeper candidate to win this year’s CFP national championship. The Trojans suffered through an 8-4 campaign a year ago and fired Clay Helton during the season. They went all-in bringing new head coach Lincoln Riley from Oklahoma. Riley brought with him his quarterback Caleb Williams and a ton of four- and five-star recruits. There are also a dozen or so transfers that will allow Riley and the Trojans, who are also listed at +1600 at top sportsbooks, to compete right away.